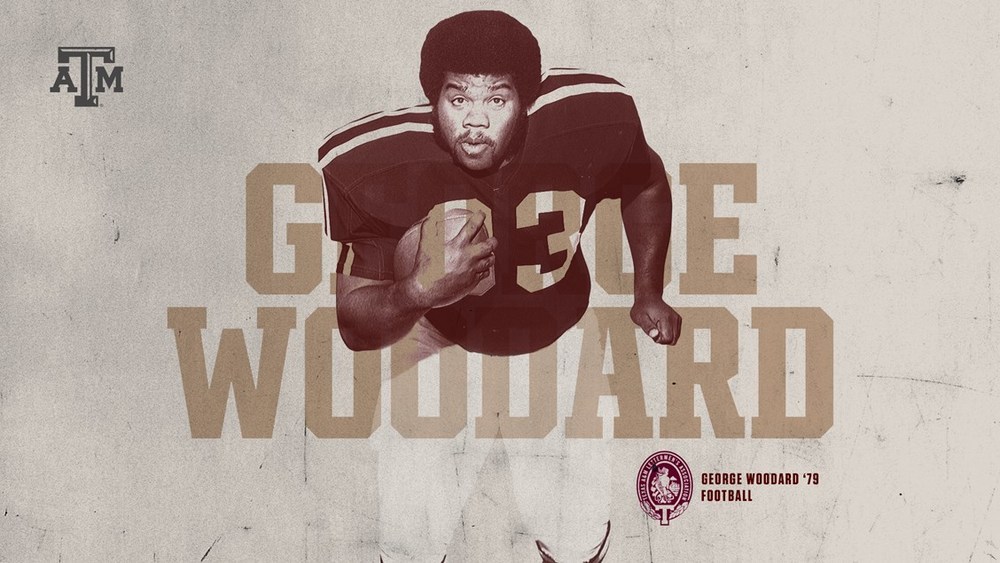 COLLEGE STATION, Texas -- Few players have captured the imagination of college football fans like George Woodard, who will be immortalized with his induction into the Texas A&M Athletics Hall of Fame this fall.

Woodard, hailing from the tiny southeast Texas town of Cedar Lake, combined the size of an offensive lineman with the speed of a world class sprinter. That unheard of combination of size and speed at the fullback position in then-head coach Emory Bellard's famed Wishbone offense made Woodard a nearly unstoppable force in the old Southwest Conference.

When asked how much "Big Woo" weighed during his playing day, Bellard told Sports Illustrated: "I don't know what George weighs. I just know he weighs more than he did at birth but less than King Kong."

Even Texas A&M's legendary athletic trainer Billy Pickard, a member of the Athletics Hall of Honor, weighed in on the subject.

"Our PE department conducted a test and submerged George in a tank of water," Pickard said. "They found he had only 3% more body fat than a normal person of his build. They told us they didn't think George would ever get much below 260."

The district champion in the 100-yard dash and the shot put at Van Vleck High School, Woodard was an immediate success at Texas A&M. He set the Aggies' freshman rushing record with 604 yards, which included 100-yard games against LSU, Baylor, SMU and Rice, while helping the 1975 team rise as high as No. 2 in the Associated Press Top 25 and a share of the Southwest Conference title.

He followed his big freshman season by becoming the first Aggie running back to post consecutive 1,000-yard campaigns. Woodard rushed for 1,153 yards with a school record and SWC-best 17 touchdowns in 1976 while helping the Aggies to a berth in the Sun Bowl, and 1,107 yards in 1977 when the team earned a spot in the Bluebonnet Bowl. A freak injury kept him out of action in 1978 and he was limited to just 47 rushing yards as a fifth-year senior in 1979.

A four-year letterman (1975, 76, 77, 79), Woodard finished his career with 2,911 rushing yards and 35 rushing touchdowns. His rushing total ranked No. 2 in school history when he finished and still ranks No. 6, while his 35 rushing scores were a school record and still rank No. 4.

The 41st-annual Burgess Banquet is open to the general public. A reception begins at 6 p.m. with dinner beginning at 7 p.m. Event sponsorship opportunities and individual tickets are still available by calling the Lettermen's Association (979-846-3024) or at 12thman.com/burgessbanquet.